Joining Mark and Jeff this week: one of the top leaders in the U.S. House, Flint Congressman Dan Kildee. 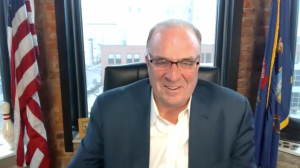 Kildee was first elected to the U.S. House in 2012 when succeeded his uncle – Dale Kildee – who had represented the Genesee Valley in Congress for 36 years. Previously he was Genesee County treasurer where he became nationally known for starting the Genesee County Land Bank in 2002. It was a first-of-its-kind-in-the-nation governmental authority dedicated to urban decay in cities such as Flint. The land bank has helped to clean up vacant and abandoned structures in the community.

The U.S. government, nonprofit organizations and think tanks have approached Kildee to expand his work to 50 cities identified by the Brookings Institution, focused mostly in the Rust Belt and northeastern United States, including Detroit, Baltimore, Memphis, Philadelphia, and Pittsburgh, which have many vacant and abandoned properties.

In Congress he serves on the two most powerful committees: Ways and Means, and Budget. And, as Chief Deputy Whip, he sits near the top of the House leadership ladder. Kildee’s  top legislative accomplishment was guiding federal assistance for Flint in the wake of the Flint Water Disaster. He has long been viewed as a rising star in Michigan politics, but resisted efforts to get him to run for Governor in both 2010 and 2018.

Mark and Jeff analyze the political calculations and impact of this week’s visit by President Joe Biden to the Dearborn Ford Motor plant, and his full-throated promotion of the new electric F-150 pickup truck.

Then they are joined by one of the national leaders in the revolt of the pre-Trump Republicans, Steve Schmidt.

Steve is a longtime communications and public affairs strategist who is best known as a co-founder of the Lincoln Project. In his career he has been a top adviser and strategist for the campaigns of President George W. Bush, California Governor Arnold Schwarzenegger, and Arizona Senator John McCain.

He was the senior campaign strategist and advisor to McCain’s 2008 presidential campaign.

In June 2018, Schmidt renounced the Republican Party as “fully the party of Trump” and later called the current GOP “an organized conspiracy for the purposes of maintaining power for self-interest, and the self-interest of its donor class … It’s no longer dedicated to American democracy.”

In a podcast in December 2020, Schmidt announced that he is registering as a member of the Democratic Party. 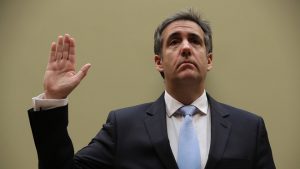 Mark and Jeff are joined by one of the most famous state’s witnesses in political history. Michael Cohen has gone from spending 12 years as Donald Trump’s “fixer” to being a key witness for multiple criminal investigations of the ex-President.

Cohen was a vice-president of the Trump Organization, and the personal counsel to Trump. He served as co-president of Trump Entertainment and was a board member of the Eric Trump Foundation, a children’s health charity. From 2017 to 2018, Cohen was deputy finance chairman of the Republican National Committee.

Trump employed Cohen until May 2018, a year after the special counsel investigation into Russian interference in the 2016 United States elections began. The investigation led Cohen to plead guilty on August 21, 2018, to eight counts including campaign finance violations, tax fraud, and bank fraud. Cohen’s indictment cited an unindicted co-conspirator, “Individual-1”, who Cohen identified as Trump. Cohen said he violated campaign finance laws at the direction of Trump and “for the principal purpose of influencing” the 2016 presidential election. In November 2018, Cohen entered a second guilty plea for lying to a Senate committee about efforts to build a Trump Tower in Moscow. 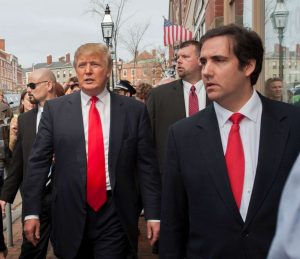 He was sentenced to three years in federal prison and ordered to pay a $50,000 fine after pleading guilty to tax evasion and campaign finance violations. Cohen was released from prison early due to concerns regarding COVID-19, to serve the rest of his sentence under house arrest.

Cohen is author of the New York Times best-seller “Disloyal: A Memoir” and hosts the podcast “Mea Culpa.”

Mark and Jeff are joined by the unofficial leader of Michigan’s progressive Democrats, Dr. Abdul El-Sayed.

The runner-up in 2018’s gubernatorial primary has gone on to national prominence and voice for new generation of Democrats.

Dr. El-Sayed is a physician, epidemiologist, educator, author, speaker, and podcast host. He is a commentator at CNN and his newsletter, The Incision, cuts into the trends shaping our moment. His books include Healing Politics: A Doctor’s Journey into the Heart of Our Political Epidemic and Medicare for All: A Citizen’s Guide which offers a no nonsense guide to the policy.

He is the host of “America Dissected,” a podcast by Crooked Media, which goes beyond the headlines to explore what really matters for our health. He is a Senior Fellow at the FXB Center for Health & Human Rights at the Harvard TH Chan School of Public Health and a Scholar-in-Residence at Wayne State University and American University, where he teaches at the intersection between public health, public policy, and politics. 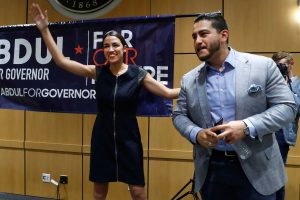 In 2018, Dr. El-Sayed ran for Governor of Michigan on an unapologetically progressive platform, advocating for universal healthcare, clean water for all, debt-free and tuition-free higher education, a pathway to 100% renewable energy, and to rebuild the barrier between corporations and government. He went from being politically unknown to garnering 30% of the vote in a three-way race.

He was the youngest health official in a major US city when he was appointed Health Director in the City of Detroit, charged with rebuilding the City’s health department after it was privatized during municipal bankruptcy.  As a professor at Columbia University’s Department of Epidemiology, Abdul became an internationally recognized expert in health policy and health inequalities.

Dr. El-Sayed holds a doctorate in Public Health from Oxford University, where he was a Rhodes Scholar, as well as a medical degree from Columbia University. He graduated Phi Beta Kappa with Highest Distinction from the University of Michigan, where he was chosen to deliver the student commencement speech alongside President Bill Clinton.