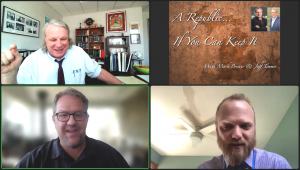 Multiple Republican county conventions devolved into chaos as Trump backers faced off with the party’s onetime establishment. Mark and Jeff analyze the fallout from the growing divide in the party and its implications for this fall. Also in our “legitimate political discourse”: the Planned Parenthood lawsuit challenging the constitutionality of Michigan’s abortion ban; and the police killing of an unarmed African American in Grand Rapids. Both have significant political implications. 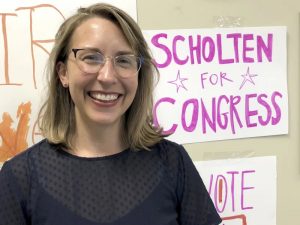 Joining the conversation this week is one of the national Democratic Party’s strongest hopes for “flipping” a congressional district, immigration attorney Hillary Scholten. She’s running in the newly drawn district centered in Grand Rapids where incumbent Republican Peter Meijer faces a Trump-supported primary opponent for the sin of voting in favor of impeaching Trump for instigating the January 6 insurrection.

This week’s podcast is sponsored by EPIC/MRA, the state’s top-rated public opinion research service.
EPIC ▪ MRA is a full service survey research firm with expertise in:

Trump gives a Castro-esque nearly two-hour speech in Macomb County, promoting his Big Lie believing candidates for Michigan Secretary of State and Attorney General … much to the consternation of non-Trumpist Republicans.

A tale of two campaigns: Congressman Fred Upton decides he’s had enough, and would-be Attorney General Tom Leonard is pushed to the exits by his party’s chairperson.

Sen. Hertel came to the Senate after more than a decade of service in local government as an Ingham County Commissioner and later the county’s Register of Deeds. As a county commissioner he successfully led the charge for creating the Ingham Health Plan, a low-cost program to provide uninsured residents with basic heathcare. As Register of Deeds Hertel pioneered a program to protect homeowners against having their homes stolen by identity thieves and foreclosure scams.
In the state Senate he is minority vice chair of the Appropriations Committee.

Sen. Hertel’s family has a long history of public service. He is the son of former state House co-Speaker Curtis Hertel. His uncles, Dennis and John Hertel, both served in the state Legislature with Dennis serving 12 years in Congress. His younger brother, Kevin, was elected to the State House of Representatives in 2016 and is currently running for the state Senate in Macomb County. In addition, his wife Elizabeth serves as director of the state‘’s Department of Health and Human Services.