Early voting is underway in Michigan. In the race for Governor, Tudor Dixon is finally campaigning, focusing on social wedge issues, but her campaign continues to lack money. She may get some help when the nation’s #1 election denier, Donald Trump, brings his Big Lie Tour to Michigan this weekend to talk about himself and maybe help Tudor and the rest of the Republican statewide ticket.

Then we’re joined by former GOP political consultant Tim Miller. He is best known for his role as communications director for the Jeb Bush 2016 presidential campaign and for being an outspoken Republican critic of former U.S. president Donald Trump. 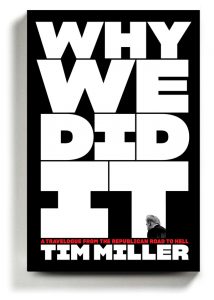 Miller was an Iowa staffer for John McCain in the 2008 Republican Party presidential primaries, and later served as national press secretary for the Jon Huntsman 2012 presidential campaign. During the Bush campaign, Miller drew notice as a “vocal critic” of Donald Trump.
In 2020, Miller co-founded the advocacy organization Republican Voters Against Trump, which sponsored television and internet advertisements featuring lifelong Republicans explaining their decision to vote for former vice president Joe Biden instead of Trump, and served as its political director. He is now a contributing writer for The Bulwark and ROlling Stone, and a frequent guest commentator on MSNBC and CNN.

Miller recently published the best-selling book Why We Did It: A Travelogue from the Republican Road to Hell.