Mark Brewer and Jeff Timmer offer their take on Donald Trump’s intrusion into the Michigan GOP races for Secretary of State and Attorney General. Will his backing of far-right “Big Lie” promoters overcome the private hesitancy of party chair Ron Weiser?
The two of them are also veterans of multiple battles over redistricting. They analyze the first draft maps published by the new Independent Citizens Redistricting Commission. Michigan loses one seat in Congress. Which party is more likely to prevail with the proposed boundaries? 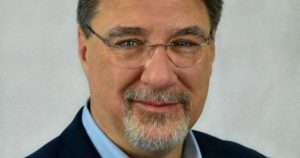 In the second segment they are joined by international affairs expert and best-selling author Dr. Tom Nichols.

Nichols is the author of the newly published best seller Our Own Worst Enemy: The Assault from within on Modern Democracy. His previous 7 books includes The Death of Expertise: The Campaign Against Established Knowledge and Why it Matters, published in 2017, a study of why people mistrust established knowledge and how this damages democratic stability. … a title even more relevant 4 years later.

Nichols is an academic specialist on international affairs, currently a professor at the U.S. Naval War College and at the Harvard Extension School. His work deals with issues involving Russia, nuclear weapons, and national security affairs. He was 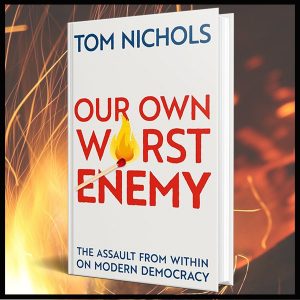 previously a fellow at the Center for Strategic and International Studies, the Carnegie Council for Ethics in International Affairs, and the John F. Kennedy School of Government at Harvard University.

Nichols describes himself as a Never Trump conservative and a former Republican. During the 2016 presidential campaign, Nichols argued that conservatives should vote for Hillary Clinton, whom he detested, because Trump was “too mentally unstable” to serve as commander-in-chief. Nichols continued that argument for the 2018 midterm elections.