The focus in Michigan politics this week is the apparent takeover of the state Republican Party by the Trump Big Lie faction even as the gloves come off in the race for the Attorney General. Bridge Michigan published a major “opposition research” dump on the sketchy professional resume of frontrunner Matt DePerno. DePerno’s campaign is also under pressure for him to disclose how he used $400,000 in contributions raised in the name of fighting for “election integrity” (meaning another audit of the 2020 election).

Topping the week will be a Trump rally in northern Macomb County in support of DePerno and Secretary of State candidate Kristina Karamo, another Trump acolyte who preaches the Big Lie. What other Republicans will show up? Just as significant will be the list of Republicans who skip the rally.

Meanwhile, Republicans are focusing on the promise to “Fix the Damn Roads” campaign pledge by Gretchen Whitmer, running an ad that could boomerang on the GOP as billions flow into road repairs in a matter of weeks, and continuing right up to Election Day.

In our second segment, Mark and Jeff are joined by former CIA spymaster John Sipher.

John Sipher retired in 2014 after a 28-year career in the CIA’s National Clandestine Service, which included serving in Moscow and running the CIA’s Russia operations. Sipher served multiple overseas tours, as Chief of Station and Deputy Chief of Station, in Europe, the Balkans, Asia, Southeast Asia and South Asia. He also ran Russian operations at headquarters. He retired as a member of the CIA’s Senior Intelligence Service, and received the CIA’s Distinguished Career Intelligence Medal. He is the co-founder of Spycraft Entertainment, a global production company run by former senior intelligence officers from the US and UK and experienced Hollywood producers.

With the war in Ukraine dominating the headlines, there’s nobody better to help us get into the mind of today’s version of the James Bond super-villain, war criminal Vladimir Putin. 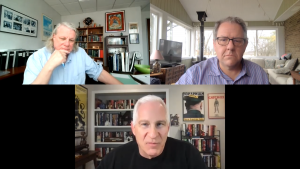