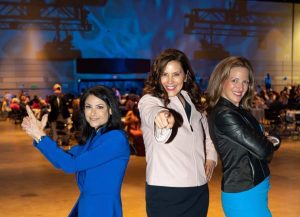 It was supposed to be a nationwide Red Wave, but nationally turned into a Pink Drizzle and (in Michigan) a Blue Tsunami. Mark and Jeff analyze an election that

Despite the pre-voting angst,it was a peaceful election with no controversies, no violence and a record turnout for a mid-term election. And just like that, the political calendar flips from 2022 to 2024!