Welcome to 2024! The dust is still settling from last week’s mid-term elections (especially among the shell-shocked GOP), but Donald Trump’s inevitable campaign is now official … greeted by the New York Post headline “Florida Man Makes Announcement” and burying the story on page 26 <ouch!>.

Closer to home, Gretchen Whitmer surprised many by making it clear she has no Presidential ambitions. Also this week: 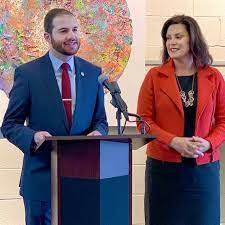 Joining the conversation this week is the newly named state Senate President Pro Tem, Jeremy Moss. Moss is completing his first term after serving for four years in the state House. He grew up in Southfield and attended Michigan State University where he participated in several student-led humanitarian aid missions in the US and around the globe, twice traveling to New Orleans in the aftermath of Hurricane Katrina to assist with cleanup efforts and spending time abroad in Uruguay to build housing in among the most impoverished areas of South America.

Moss’s political career began 11 years ago with a successful run for a seat on the Southfield City Council where became the youngest-ever elected official in the city’s history at age 25. In the state House he worked across the aisle to pass ten bills that would open up government records to public scrutiny by subjecting the governor’s office and state legislature to the principles of the Freedom of Information Act.