Jeff is off this week as he and his family deal with the sudden passing of their youngest son. Our hearts go out to Jeff, Mattie and their four other children. They have asked that we all respect their privacy. If you would like to send a message to the family, you can email “Comments@ARepublicPodcast.com”.

Pinch-hitting for Jeff this week is one of the best of state capitol journalists, Craig Mauger of the Detroit News. Prior to joining the News, he was Executive Director of the non-partisan Michigan Campaign Finance Network (MCFN) 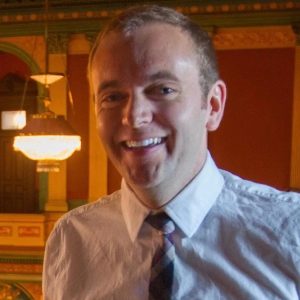 where he tracked the money that drives the political system.

Craig is a graduate of Ohio University’s Scripps School of Journalism. He spent a decade working as a journalist covering government and politics. Prior to going MCFN three and a half years, he worked as a reporter for Michigan Information & Research Service (MIRS News) in Lansing. At MIRS, much of Mauger’s coverage focused on money in politics. He’s written about the changing role of politically focused nonprofits, investigated the purchase of a new Senate office building and uncovered that a top state official was benefiting from primary residence tax breaks in two states.

At the Detroit News, has continued to “follow the money.”

Since our last “legitimate political discourse,” Putin invaded Ukraine on what he labeled a peacekeeping mission (complete with bombs, missiles and miles-long convoys), President Biden began what the White House hopes is a reset with his State of the Union address, and the debate over Michigan’s new legislative districts’ impact on African-American voters became more heated.

Public relations and political consultant Darci McConnell joins the conversation to weigh in on the latter, as well as help us take the political temperature of Southeast Michigan. 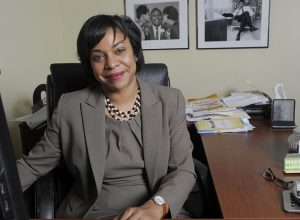 A graduate of the University of Michigan, McConnell is no stranger to local government and politics. As president and CEO of Detroit-based McConnell Communications, Inc., she routinely works with local municipalities and politicians and in 2020, she was appointed to the Grosse Pointe Park City Council – the first African American to serve.

She has owned and operated her public relations business for 18 years and previously spent 14 years as a newspaper reporter across Michigan as well as in Washington, D.C. Her personal passion is making a difference in the lives of young people through mentoring and other opportunities.

The week in Michigan Politics:
There’s another multi-millionaire candidate for Governor who’s off to a rocky-but-expensive start. Abortion and the right to use birth control grow as possibly pivotal issues in the 2022 general election. Mark and Jeff analyze both subjects.

The conversation pivots to the criminal cases against former President Donald Trump. Adding her expertise is former U.S. Attorney for Southeast Michigan Barbara McQuade. McQuade’s areas of legal interest include criminal law, criminal procedure, national security, data privacy, and civil rights. From 2010 to 2017, Professor McQuade served as the U.S attorney for the Eastern District of Michigan. Appointed by President Barack Obama, she was the first woman to serve in her position. 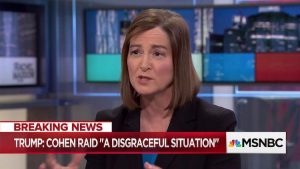 McQuade also served as vice chair of the Attorney General’s Advisory Committee and co-chaired its Terrorism and National Security Subcommittee. As U.S. attorney, she oversaw cases involving public corruption, terrorism, corporate fraud, theft of trade secrets, civil rights, and health care fraud, among others. Professor McQuade also serves as a legal analyst for NBC News and MSNBC. She also co-hosts the #Sisters In Law podcast.
Professor McQuade teaches law at the University of Michigan where she earned her bachelor’s and law degrees.

Another bizarre week in Michigan politics:
* former Michigan Republican chairperson Laura Cox is subpoenaed by Congress
* the home of two top staffers of former House Speaker Lee Chatfield is raided by the state police
* the Michigan Republican Party has an internal fight over how it will count votes at its state convention – will they continue to use the machines they bought from Dominion?

Mark Brewer and Jeff Timmer analyze the political fallout. Then they are joined by Michigan Lt. Governor Garlin Gilchrist for a broad-ranging discussion of the Whitmer administration’s priorities for 2022 and beyond. 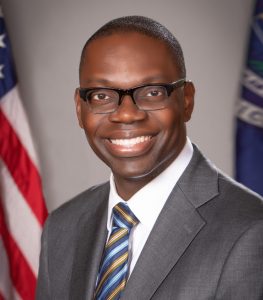 Lt. Governor Gilchrist’s professional background is in technology, receiving his first computer at age five and setting up a computer lab in a Detroit community recreation center using computers that he built himself at age 16. He studied computer engineering and computer science at the University of Michigan, graduating with honors, and later had a successful career as a software engineer at Microsoft, helping to build SharePoint into the fastest growing product in the company’s history.

Lt. Governor Gilchrist spent the next several years of his career as a social entrepreneur and community organizer who helped people in communities across America realize their full economic and political potential. 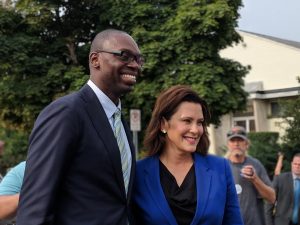 As part of the Whitmer Administration, Lt. Governor Gilchrist has sought to address injustice and inequity across our state at every level co-chairing the Michigan Joint Task Force on Jail and Pretrial Incarceration to leading the Coronavirus Task Force on Racial Disparities.

Lt. Governor Garlin Gilchrist and his wife, Ellen, reside in Detroit where they are raising their twins, Emily and Garlin III, and daughter, Ruby.

Still more on the Electoral College fraud conspiracy, the ever-growing field of far-right-wing Republican gubernatorial candidates and an amazing roster of petition drives are afloat in Michigan. Those of the subjects of our opening segment, now officially called our weekly “Legitimate Political Discourse.”

Then we shift the focus to the long-term future. While most of the political focus is on the 2022 and 2024 campaigns, there’s a new generation of voters who will soon dominate our political discussion. And they are decidedly leaning left.

John Della Volpe is the Director of Polling at the Harvard Kennedy School Institute of Politics, and the author of “Fight: How Gen Z is Channeling Their Fear and Passion to Save America.” The Washington Post referred to John as one of the world’s leading authorities on global sentiment, opinion and influence especially among young Americans and in the age of digital and social media.

In 2008, John received an Eisenhower Fellowship for which he traveled extensively throughout China, Hong Kong, and Korea (including a supervised day in North Korea) studying Millennials; in 2011, he was appointed to the U.S.-Russia Bilateral Presidential Commission on Media. His TV appearances include the most prestigious in politics: The Daily Show with Trevor Noah 😎!

Mark Brewer and Jeff Timmer sort it all out on this week’s episode! 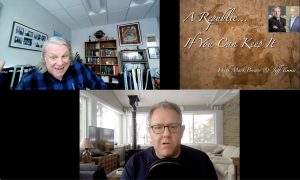 Another huge week in Michigan politics: 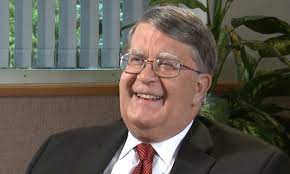 Joining the conversation is a legendary figure in Michigan politics, Bob LaBrant.

LaBrant served the Michigan Chamber of Commerce for 34 years, heading the political and legal programs. He is known nationally for his help in organizing corporate, association and chamber political action committees.

LaBrant has been active in the redistricting process in Michigan over the past four decades. He was the primary architect of Operation Redmap – the successful 2010 effort to take control of redistricting by winning control of the Michigan Legislature. As a result of his efforts, Republicans were able to gerrymander the state to maintain control of the Legislature and congressional delegation for most of the last decade. 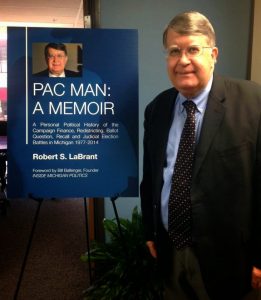 Throughout his career, LaBrant aggressively pursued campaign finance legislation, Department of State rulings, campaign finance complaints and political litigation. And, as a longtime friend of Bob’s, I can say that even his most ardent opponents … including Mark … respect Bob for both his incredible political talent and his impeccable integrity.

His role in the 2010 Michigan gerrymander is part of his excellent book “PAC Man: A Memoir”, a revealing look at the real world of contemporary Michigan politics. 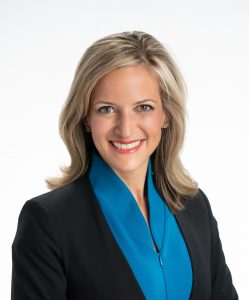 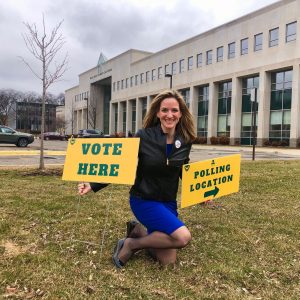 The full half-hour-plus this week is devoted to several amazing developments in Michigan Politics, beginning with the dual scandals enveloping former state House Speaker Lee Chatfield. Accused first of sexual abuse by his now sister-in-law beginning when she was a teenager, he’s now the subject of investigations into his massive political slush fund.

Also on the agenda for Jeff and Mark: musical chairs as Michigan’s members of Congress figure out where they are running after redistricting, and who’s running to join the delegation; covid hits the Governor’s husband and her Lt. Governor in the same week; and Joe Biden takes off the gloves as the 2022 campaign gets underway in earnest.

And don’t forget — we’ve got some great stuff waiting for you at the Merch Store. Check it out! 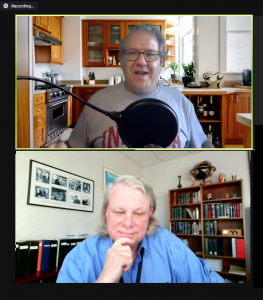 To start the new year, Mark and Jeff take a look back at two of the most tulmultuous issues of 2021: the anniversary of the January 6 assault on the Capitol and Republican efforts to rig future elections.

We go back to some often prescient commentary by five in our roster of amazing 2021 guests:

We’re back in a week to kick off what promises to be a more-than-lively 2022 campaign season!