Mark and Jeff discuss the latest entrant into the Republican gubernatorial sweepstakes, millionaire auto dealer Kevin Rinke. Plus: the potential for a bedsheet ballot with a dozen citizen petition drives underway or being discussed, the Independent Citizens Redistricting Commission gets a scolding from the Attorney General, and Mark shares details of a lawsuit he has filed on behalf of the Michigan League of Women Voters challenging gerrymandering at the county level.

They are then joined by Representative Rashida Tlaib (D-MI 13th), the outspoken member of “The Squad” and, from Day One, an advocate of impeaching former President Trump. 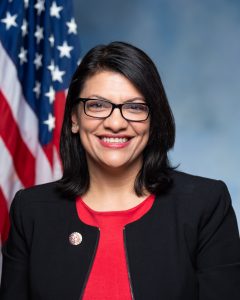 Rashida Tlaib is a well-known progressive warrior and, in her own words, “a mother working for justice for all.” Her two young sons are at the root of her unwavering passion to help change lives for the better. She is the oldest of 14 children, born and raised in Detroit, the proud daughter of Palestinian immigrant parents.

Tlaib made history in 2008 by becoming the first Muslim woman to ever serve in the Michigan Legislature.

In 2018, she won the Democratic nomination for the United States House of Representatives seat from Michigan’s 13th congressional district. She ran unopposed in the general election and became the first woman of Palestinian descent in Congress, the first Muslim woman to serve in the Michigan legislature, and one of the first two Muslim women elected to Congress, along with Ilhan Omar (D-MN). Tlaib is a member of The Squad, an informal group of six (four until the 2020 elections) U.S. Representatives on the left wing of the Democratic Party.

Tlaib is a member of the Democratic Socialists of America (DSA). She and Alexandria Ocasio-Cortez (D-NY) are the first female DSA members to serve in Congress. Tlaib has argued in favor of abolishing the U.S. Immigration and Customs Enforcement and the police. On foreign affairs, she has sharply criticized the Israeli government, called for an end to U.S. aid to Israel, supports a one-state solution, and expressed support for the Boycott, Divestment and Sanctions campaign.

Tlaib is the oldest of 14 children born to working-class Palestinian immigrants in Detroit. Her mother was born near the West Bank city of Ramallah. Her father was born in East Jerusalem. He moved first to Nicaragua, then to Detroit. He worked on an assembly line in a Ford Motor Company plant. As the eldest, Tlaib played a role in raising her siblings while her parents worked.

She is currently the Congresswoman for Michigan’s 13th Congressional District, which includes the city of Detroit and many surrounding communities.